Geography of Bulgaria in English

Geography of Bulgaria in English 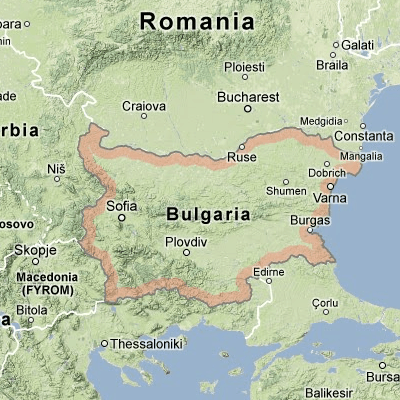 Despite its small area of 110 911 km², the Bulgaria enjoys a wide variety of landscapes.
Highlands is located in the centre and South West of the country. We find the Balkan chain in the Midwest and the Rhodope Mountains and massifs of the Rila and the Pirin to the South South West. Some peaks exceed 2,000 metres!
Two Great Plains share the country. The Thracian plain between Sofia to the West and the Black Sea to the East, and the plain of Droboudja in the North is. These Plains are fertile, there are so many cultures of wheat, corn, etc.
The coastline borders the Bulgaria to the East, on the shores of the Black Sea. It extends over 378 km and contains many white sand beaches.

A country of mountains:

The (big) Balkan (or Stara Planina, or “old mountain”), the chain the largest, culminates at ‘only’ 2 376 m to the Botev peak. He has no less a certain size, you will find ample crossing over a few passes that deign to address. It marks the line of the watershed between the Aegean Sea and the Danube basin, and extends, in the former Yugoslavia, by a tangle of massive constituting the heart of what is meant by the term of Balkans (in the plural).

The Sredna Gora (or “medium mountain”) is immediately parallel to the heart of the Balkan and delineates with him the famous Rose Valley.

The mount Vitosha, Sofia doors, forms a massive isolated to tied Vrah 2 290 m. City dwellers are summer hike and there ski winter in Aleko, even if equipment are pale compared with those of the major resorts.

The massif of the Rila

The massif of Rila, extended just to the South, houses peak Musala, climax of the country and of the Balkans, 2 925 m. across its top (above 2,100 m) has been shaped by the ice ages of the pleistocene, to which it owes its Alpine character its circuses, its peaks, deep valleys, and its 190 Lakes. There are the oldest Bulgaria’s winter resorts, big hotels nestled in a vast pine forest: Borovets, 75 km south of Sofia.

The chain of Pirin

The chain of Pirin, in the South-West of the Bulgaria, is the second largest high with peak Vihren (2 914 m). Shaped like the massive of the Rila by the glaciers, it is home she also many lakes of altitude, circuses and removed summits – and the Bansko winter resort.

Old massif of the Rhodope Mountain

The old massive of the Rhodopes, stretched along the Greek border, occupies alone nearly one-seventh of the country! If it is a little lower (Golyam Perelik 2 191 m), is not less beautiful, with its deep forests and its gorges narrow (Trigrad and Yagodina) including. We distinguish the Rhodopes (highest) Western, where the ski resort of Pamporovo, the Eastern Rhodopes (lower).

EnvironmentNational parks and the Unesco sites

The Bulgaria has three national parks (Rila, Pirin and central Balkan) strictly protected as well as 11 natural parks to the more flexible system (activities are allowed).
– National park Rila: the great of Bulgaria, it extends to 100 km south of Sofia, encompassing most of the massif of the Rila and forests which cover. Belongs to the highest point of the Balkans, the Musala (2 925 m) and a hundred peaks over 2,000 m.
– Pirin national park: the South of the massif, to the immediate North of the Rhodope Mountains and Rila to to its rich biodiversity have been registered in the world heritage of Unesco in 1983. Point peak of the massif, the Vihren peak (2 914 m) is surrounded by mi-alpins beautiful mi-karstiques, strewn Lakes, waterfalls, caves and large forests of stately pines…
– The central Balkan national park: it protects the highest part of the Cordillera of the Balkan, at the heart of the country (region of Kalofer, Karlovo and Kazanlak, Gabrovo).
-Among the 160 natural sites protected in the country, two are on the list of world heritage of Unesco: Pirin Park, already present, and Srebarna Lake (600 ha) adjacent to the Danube, located on the via Pontica, near Silistra. Some 80 species of waterfowl are stopover during migration.

The Bulgaria surprises by the relative diversity and quality of its natural landscape. Mountain areas are particularly well preserved. Although outside of the national parks and natural, the massif of the Rhodope still, houses for example, bears and capercaillies! The carriages have been installed to try to see them. Here and elsewhere, the omnipresent forest to the often secular trees attracted – even more in October when she takes glimmering colours. Flora, it has more than 13,500 listed species.
In short, green tourism has every reason to flourish in Bulgaria! We can easily practice mountain biking, paragliding, horse riding, canoeing, climbing, caving… and of course hiking, pampers Bulgarians, served by a large network of shelters. … Hunting and fishing are also very present.
However, if develops in ecotourism, the collective consciousness, she, is progressing slowly. According to a study, the Bulgaria would be among the European countries that where citizens undertake the less stock on a daily basis for the protection of the environment…